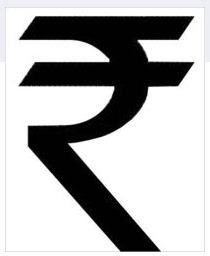 The Indian rupee will have its own symbol, a mix of the Devanagri 'Ra' and Roman 'R', to become the fifth currency in the world to have a distinct identity. The new symbol, designed by IIT post-graduate D Uday Kumar. The new design also based on the tricolour with two lines at the top and white space in between.So India is moving to the group of countries that pocess a symbol for their currencies. Now US dollar, the British pound, the euro and the Japanese yen pocess their own symbols. Come on India, and Indian Rupee! Soon the computer key board will have new symbol for rupee. The Indian currency also will come with new symbol very soon.