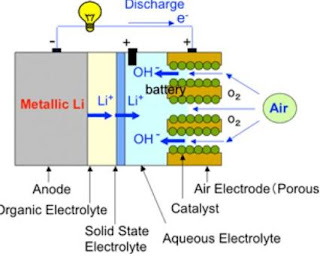 A lithium-air batteries are batteries lithium anode is electrochemically coupled to atmospheric oxygen through an air cathode. During discharge, lithium cations flow from the anode through an electrolyte and combine with oxygen at the cathode to form lithium oxide Li2O or lithium peroxide Li2O2 which is inserted in the cathode; this is coupled to the flow of electrons from the battery's anode to the cathode through a load circuit. The lithium ion batteries used in laptops and cellphones. Reversibility of the reaction to allow electrical recharge of Lithium-air is possible.
Lithium air cells have higher energy mass than lithium ion cells because of the lighter cathode and the fact that oxygen is freely available in the environment and does not need to be stored in the battery. It is considered that Lithium air batteries are three times better. With oxygen as an unlimited cathode reactant, the capacity of the battery is limited by the Li anode. Lithium air batteries are currently under development and are not yet commercially available. Watch a comparison statement showing battery capacities of various types of batteries. 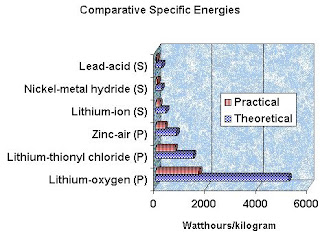